The Barang Regional Alliance has now officially been established, with the inaugural Board appointed.

Barang is a new Central Coast organisation aimed at empowering the Aboriginal community of the Central Coast through a unified voice.

The word ‘Barang’ means ‘tomorrow’ in the Darkinjung language. Chairperson,Sean Gordon said, “The organisation will work towards creating community prosperity so that our young people have a brighter future.”

Barang believes in Aboriginal-led responsibility and ensuring accountability and transparency by all stakeholders. Barang members will actively seek to learn from each other and support each other to best meet the needs of the community and tackle the problems and challenges the community faces.
Barang will lead the Empowered Communities initiative and NSW Local Decision Making (LDM) initiative for the Central Coast region. Amongst the new organisation’s first tasks will be progressing the First Priorities Agreement under the Empowered Communities reform and the development of an Accord under the NSW LDM agenda.

According to Sean Gordon, “This gives the community an opportunity to make significant advances in the next two to three years in a few key priority areas.’

To inform the development of the First Priorities Agreement and the LDM Accord, a series of community workshop have recently been held with the staff and clients or members of each of the Barang member organisations. Empowered Communities Representitive Steve Adams said, “These workshops gave a broad cross-section of the community an opportunity to express their views on what community priorities are on the Central Coast, the causes of those issues, and to explore practical measures that could be taken to successfully tackle those issues.’

In the coming months, these ideas will be further developed by Barang.

The establishment of Barang marks an important milestone for the Central Coast. ‘Much has been achieved to date and it is terrific to see our community organisations working together and showing leadership through Barang,” Sean said.

GO TO BARANG BULLETIN NO 2 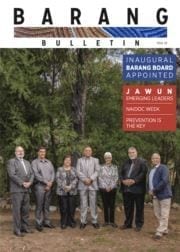