12 Dec BARANG SETS THE WAY AHEAD

BARANG SETS THE WAY AHEAD

Work is underway building the structure for a new organisation aimed at empowering Aboriginal communities and promoting local decision making on the Central Coast. This follows the signing of a new partnership agreement between the seven Central Coast Aboriginal community service organisations. The new organisation is known as Barang and interim Co-Chair Sean Gordon said work is underway to determine the best structure for Barang.

Barang is supported by both the Federal and New South Wales Governments.

It will execute a regional strategy that is aligned with the Federal Government’s Empowered Communities initiative and the NSW State Government’s OCHRE Local Decision Making Strategy.

To date several workshops have been held with the founding members to define the specific role that Barang will play, how it will be governed and what actions and key initiatives needed to plan and execute to bring it to reality.

“We have achieved a lot by signing the agreement. We need to secure the support and resources to put people into the roles so they can identify the priorities and targets, begin building stronger relationships with our founding members, service providers and governments and plan the way ahead. In the New Year we plan to establish regional tables that include like-minded Aboriginal and non- Aboriginal service organisations.

The aim is for them to collaborate, look at where Aboriginal funding is being directed and what impact it is having in the specific area of need,” he says.

We are confident Barang will be successful.

“It has taken us along time to get where we are today. With the type of reform and agenda we are talking about and by working collaboratively with our Barang founding members and in partnership with other service organisations I believe we can make significant advances in the areas of need within three years,” he says.

GO TO BARANG BULLETIN ISSUE NO. 1 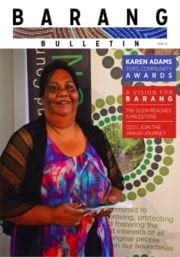