Home / About Empowered Communities / Our Journey

Began with Indigenous leaders from the eight regions coming together around a common set of goals and challenges.

We are proud of the progress that we have made on our journey since 2013 when Indigenous leaders from eight remote, regional and urban areas came together. We identified a common vision. We drafted a comprehensive set of transformational reforms to give our children the same opportunities and choices that other Australians expect for their children. We have secured the government’s agreement to work on the regional part of our agenda. We are working hard on implementation. We are optimistic about meeting the implementation challenges ahead given how much we have achieved together since 2013 and the broad bipartisan political support for Empowered Communities.

We first met together in June 2013 on the Central Coast of New South Wales. We were 25 Indigenous leaders from eight regions who decided to join forces to achieve the transformational changes we are all seeking. Following this meeting we developed a proposal to government setting out a framework for comprehensive structural reform of Indigenous affairs in our regions, through a new, more balanced partnership with governments.

By August 2013, both sides of federal politics had supported a detailed design phase to develop the proposed Empowered Communities reform agenda. Ideas were further discussed in August 2013 at the Yothu Yindi Foundation’s Garma Festival in north-east Arnhem Land, and a set of design principles were agreed.

We launched Empowered Communities on 28 August 2013 to national media coverage.

During 2013-2015 we met regularly as a leadership group to develop and design our proposals for reform and to oversee progress.

In collaboration with Indigenous leaders and organisations in our regions, and with continuing support from major Australian corporates through Jawun, and support from the Commonwealth, State and Territory government, we advanced our ideas about the Empowered Communities model. The recommendations in our report set out our plan for a long-term Indigenous Empowerment policy framework built on a partnership between Indigenous people, governments and corporate partners. The framework seeks to ensure that Indigenous people in Empowered Communities regions can benefit from their right to economic, social and cultural development and that, in pursuit of that goal, resources and opportunities are most productively used.

The design phase included a committee made up of senior Indigenous leaders, corporate members, and government representatives from the Commonwealth, New South Wales, Queensland, Western Australia and the Northern Territory. This steering committee provided valuable strategic advice and guidance, generated ideas and much interest in this project.

Engagement and consultation in our regions

Engagement work commenced early in the design phase. We wanted to ensure that our practical knowledge and experience, and that of other Indigenous people in our regions, informed the design of our model. It had to be workable and able to meet each region’s needs and priorities. We led engagement and consultation processes within our regions to build support for Empowered Communities, with potential opt-in organisations, other organisations, cultural leaders and individuals.

After finishing our design report in March 2015 and submitting it to government, we continued to engage within our regions and communities, working with those who wanted to opt in to the Indigenous Empowerment agenda. We wanted to ensure the widest possible understanding of, and support for, the Empowered Communities reform model within our regions.

When 3 year funding was agreed by the Commonwealth government from 1 July 2016, we began to implement the regional aspect of our Indigenous Empowerment reform. We continued to build the urgency for change. We did this by building strong governance structures including local Boards and regional partnership arrangements, setting up Backbones and importantly, establishing ongoing community discussion and engagement. Early priorities started to emerge as individuals, families and communities began to talk about what was important to them. These priorities form the basis for Regional Development Agendas, and underpin joint decision making arrangements that are occurring between government and community.

In mid-2017, each Empowered Communities regions delivered a Regional Report. These reports provided a snapshot of early progress and included descriptions and case studies of their approach, their baseline date, community engagement activity and early learning.

Regions have been listening to individuals, families and their community to understand what is important to them. They are building an evidence based approach to their Regional Development Agendas. Joint decision making with community and government is bringing this partnership to life as communities start to see examples of the changes that they are seeking.

These early implementation steps and learning are key to building a strong foundation to help us to deliver our vision for a better future for our children by closing the gap on Indigenous disparity over time.

Empowered Communities Leaders were successfully secured an additional three years funding (2019 -2022) to continue implementation. This enables our Regional Leaders to continue to implement and learn from this regional approach which puts Indigenous people in the driver’s seat and the role of government is one of enabling and supporting their decision-making.

Regions continue to building and deliver on their plans, all informed by the individuals, families and communities that they affect. Change is slow and implementation takes time.

Across our regions we are implementing part of our Empowered Communities reforms. We are working in partnership with the Commonwealth government, and developing partnerships with State and Northern Territory governments. We are continuing to work with corporates through Jawun partnerships.

The Commonwealth government has agreed to partner with us in our regions. This has enabled us to set up backbone organisations to support regional Indigenous leaders implement our reforms. We are continuing discussions with the government about our proposals for institutional reform at the national level to ensure that the gains that we make at the regional level are sustainable.

We are bringing our reforms to life. We are consulting with Indigenous people and organisations in our regions. We are analysing data and looking at the existing services provided in our regions. We want to ensure that all available resources and opportunities are used as productively as possible. Based on this data, and the knowledge and experience of Indigenous people in our communities and regions, we are working on developing First Priority Agreements in 2016-17 ahead of developing a five-year Regional Development Agenda for each of our 8 regions.

This implementation work is key to help achieve our vision that our children have the same opportunities and choices that other Australians expect for their children.

Download the full 2017 Regional Report via the link below:

Throughout our journey we have been working with Jawun

Established in 2001, Jawun is a unique not for profit organisation that mobilises the skilled resources of corporate, government and philanthropic Australia to enable Indigenous-led change. Working side by side with Indigenous leaders, Jawun plays a critical role in strengthening capabilities, through the transfer of skills, and providing firepower to local reform programs.

In recent years, Jawun has provided an important collaborative link across the eight Empowered Communities regions, encouraging a network of shared learning and connecting the thinking and innovation of individual Indigenous leaders. The Indigenous leaders of Empowered Communities have also been supported in developing their comprehensive proposal to government, with resourcing from Jawun secondees and strategic advice from senior business leaders in the Jawun network.

In 2015 Jawun celebrated its 15 year anniversary, having grown in depth and breadth across the country and forging countless connections.

Jawun’s latest report – A Story of Shared Value: Corporate and government partners – is Part 1 in a two-part series. It focuses on Jawun’s secondment partners and explores the value of the Jawun relationship at a number of levels. Part 2 in the series, to be released in 2016, will focus on Indigenous partnerships and explore how Jawun is contributing to lasting and measurable outcomes in the lives of people across our communities. 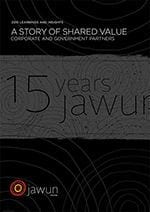