Cape York is a region of linguistic, cultural and environmental diversity. Cape York Indigenous people have much in common and are bound by shared history. Before colonisation, Cape York was densely populated and people maintained complex kinship networks and traded across the continent.

Over many years Cape York has endured extraordinary levels of government and missionary control. After dislocation, dispossession and the mission time came a period in which Indigenous peoples’ rights were increasingly recognised. This brought benefits but also unintended consequences. Indigenous people were recognised as citizens of Australia and equality took a leap forward with the 1967 referendum and the elimination of racially discriminatory legislation. This progress, however, also delivered Indigenous people in Cape York the right to drink alcohol and the right to gamble. After the introduction of a regular supply of alcohol, Cape communities that were ‘once liveable and vibrant’ became ‘disaster zones’.

The recognition of the right to equal wages brought mass unemployment as many Indigenous pastoral workers were laid off.  With the entitlement to welfare we gained ‘the right to welfare dependency’. Government intervention in the lives of Indigenous people increased and services were increasingly provided to fix problems. But governments acted in a way that took away our responsibility and decreased our self-reliance.

We have strong leadership in Cape York. We have many capable people, young and old, male and female. The insights and the shared vision articulated by the Cape York people gave birth to the Cape York Agenda and the Cape York Welfare Reform trial.  We demanded a move – from a hand-out to a hand-up mentality – to overcome the corrosive effects of passive welfare. We do not need our problems fixed for us: we must be enabled to fix them for ourselves.

Despite our successes, we have a long way to go. We face an employment crisis, our region remains underdeveloped and home ownership is not yet possible, let alone a norm. Forty years of passive welfare has displaced responsibility from Indigenous people. We must continue to confront this crisis. We have started to rebuild social norms and local authority and we need government to continue to invest in building the capability of Cape York people to ensure the right enabling environment for development. Under Empowered Communities we have the opportunity to improve Indigenous led governance and empower our reform leaders. 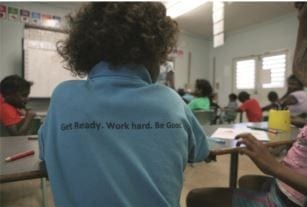